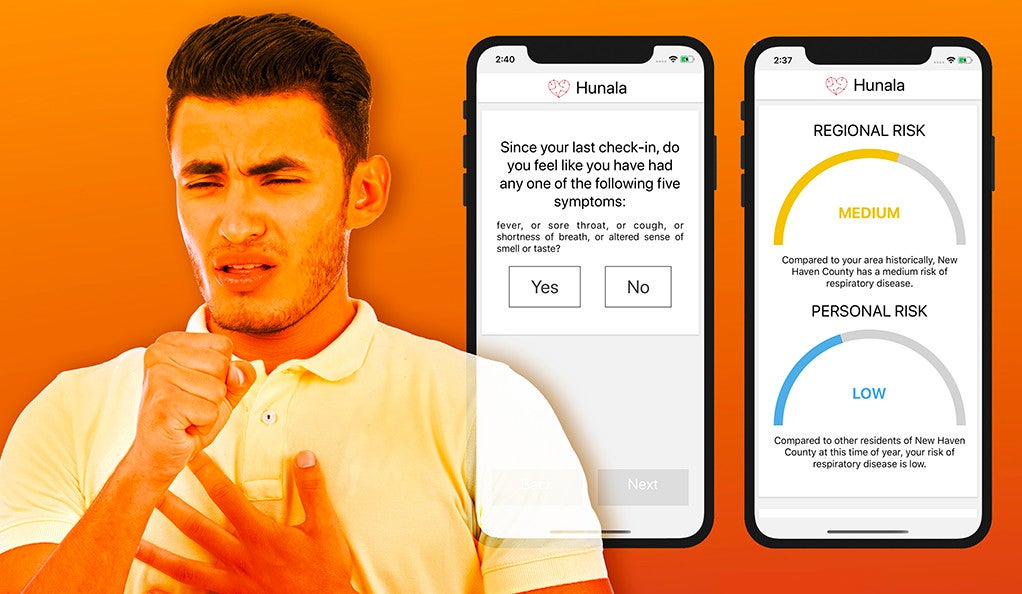 Yale app Hunala aims to be ‘Waze for coronavirus’

Yale News: A team of Yale researchers has developed a new app, Hunala, that aims to be the “Waze for coronavirus Led by Sterling Professor Nicholas Christakis, a physician and social networks expert, with colleagues in the Yale School of Engineering and Applied Science, the free app provides a daily snapshot of personal and regional risk for COVID-19 infection based on data from the Centers for Disease Control and Prevention and users’ self-reported health and demographic information.

Just as Waze relies on crowd-sourced data to provide real-time updates of traffic conditions in order to redirect drivers to less congested routes, Hunala relies on daily inputs from users to provide a real-time look at coronavirus risk based on individuals’ associations, activities, and health status. The app’s effectiveness at assessing COVID-19-related risks improves as the number of users grows. Since the app launched two weeks ago, 3,000 people have signed up.

“We think this will help the American public as we emerge from lockdowns to assess their risk,” said Christakis, the Sterling Professor of Social and Natural Science, “especially as we head toward a second wave [of infections].”

Christakis directs The Human Nature Lab, part of the Yale Institute for Network Science, which aims to better understand the intersection of human networks and human health.

When users download Hunala, they are prompted to enter basic information about themselves, including location, age, health history, prior positive tests for COVID-19, and whether they’ve been in large gatherings in the past 24 hours.

Each day, the app asks users for updated information. In return, it adjusts two color-coded dials, one representing their regional and one their personal risk, from low (blue) to high (red).

During sign-up, users also list people from their phone contacts who are close family and friends. These contacts receive a notification that someone they know has joined Hunala and an invitation to join. A person’s social network helps the app assess risk because disease spreads from person to person.

“A person closer to the center of the network is at higher risk,” Christakis said. “Popular people are more likely to get infections early in the epidemic.”

The app is designed to protect users’ privacy and anonymity: contacts are only messaged once; the app does not store contact information; and users’ names and health information are never shared.

But these networks of people are essential for the app to assess risk.

“If something happens in some part of the network — if one ‘node’ tests positive, then the risk goes up for people in that network,” said Yale’s Amin Karbasi, assistant professor of electrical engineering and computer science and head of the multidisciplinary Interference, Information, and Decision Group. He is leading the machine learning and artificial intelligence backbone of the app.

As Waze leads drivers to change routes when there’s a traffic jam ahead, the researchers hope that Hunala’s assessments will help users to modify their behavior to reduce their risk.

“If the app tells you that your risk is high, you may be more likely to physical distance from friends and not go outside as much,” said Jacob Derechin, a doctoral student in Christakis’ Human Nature Lab and a member of the team.

Christakis began studying social networks 20 years ago. In a 2010 TED talk, “How social networks predict epidemics,” he describes how certain people represent the centers of networks, with many connections via family, friends, and work. “If we want to track something that was spreading through a network,” such as a disease, he said, “what we ideally would like to do is to set up sensors on the central individuals … monitor those people that are right there in the middle of the network, and somehow get an early detection of whatever it is that is spreading through the network.”

Hunala is an effort to do this: By pulling data from as many people as possible it predicts who is at risk and warns them to act accordingly.

“This is a tool, just like masks,” Christakis said. “We are alive at a moment when a new pathogen has been introduced to our species. It’s not going away, and millions of us will be affected.”

The best defense, he said, is information.

Accessibility at Yale   Inference, Information, and Decision Group at Yale